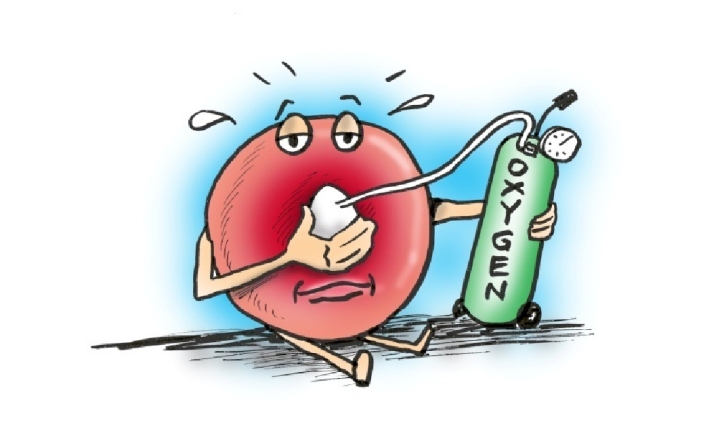 To recap the last blog post about the importance of counting respiratory rate:

In this blog post, we are going to discuss respiration and the relationship between oxygen saturations and the partial pressure of oxygen (PaO2) in our bodies when we are experiencing a failure to oxygenate (type 1 respiratory failure). Respiration is defined as the process of gas exchange, namely carbon dioxide and oxygen. It occurs at the end point of our lungs known as the alveoli. When we ventilate air from the atmosphere into our alveoli, there is more oxygen in the air in our alveoli than there is in blood that is passing our alveoli. Therefore, oxygen moves via diffusion from an area of high concentration (alveoli) to an area of low concentration (blood). The oxygenated blood carries the oxygen around the body to be used up by the various cells in our bodies.

There is one important thing you must understand about oxygen; it is a terrible swimmer! What do I mean by that? I mean that it struggles to move around efficiently when it is sitting in fluid of any kind. So when it enters the bloodstream, it needs something that will help carry it around otherwise it will float around the blood inefficiently. Oxygen therefore attaches itself to the haemoglobin in our body and uses the haemoglobin as a transport device to help move it around the body to the cells that require oxygen to function. The important thing to note here is that in order for our cells to be able to use the oxygen, oxygen needs to de-attach itself from the haemoglobin and be freely floating around the blood once again.

There are a couple of things that can be immediately identified on this curve:

Unlike ventilation problems, oxygenation problems are easy to identify simply by the oxygen saturations trending down. Remembering that oxygen is not a very good swimmer, oxygen is not going to get very far if there is any fluid in the alveoli. As a result, the capacity for the body to get oxygen from the alveoli into the bloodstream to the cells diminishes. Imagine Mr Wilson has lungs that are partially filled with water; how well is oxygen going to be able to swim through the water in order to get to the edge of the alveoli and facilitate gas exchange into the bloodstream?

Mr Wilson has no issues ventilating and getting air into his lungs, his body has an issue with the ability to move the oxygen in the air from his alveoli into the bloodstream. It is only when Mr Wilson’s oxygen saturations drop below 90% that we start seeing an increase in respiratory rate. This is a backup feature the body has to attempt to get more air into Mr Wilson’s lungs in order to help optimise gas exchange. If this doesn’t work, Mr Wilson’s oxygen saturations and PaO2 will continue to fall to the point where his cells can no longer function effectively, if at all. Failure to oxygenate is also known as type 1 respiratory failure and is defined as a decreased PaO2 with a normal carbon dioxide level. The reason for why oxygenation problems do not result in a high carbon dioxide level is because unlike oxygen, carbon dioxide is a fantastic swimmer that will make it’s way through the bloodstream and into the alveoli, even if there is fluid in the alveoli. Then the carbon dioxide in the lungs are simply ventilated away.

When you consider what you have read in this blog post and in the previous blog post, consider this very important notion. A failure to ventilate will eventually cause issues with oxygenation and likewise, a failure to oxygenate will eventually cause issues with ventilation. Despite having independent reasons that can cause a patient to deteriorate, ventilation and oxygenation are also co-dependent. It is always easier to fix a problem when there is only one problem, a bit more difficult when another problem is introduced. So aim to pick up the deterioration early and avoid having to deal with the age old question: which came first, the ventilation problem or the oxygenation problem?

If you liked this post, why not subscribe to Blogging for your Noggin? Be one of the first to know when new content becomes available! I promise there will be no annoying spam!

If you learnt something new, why not share this blog with others on social media:

5 thoughts on “Oxygen Saturations Versus PaO2”

Do you have a question? Or a suggestion for a new topic? Cancel reply

I am a clinical educator working full-time at a 42 bed tertiary referral Intensive Care Unit that provides comprehensive life sustaining therapies for the critically ill.

I love what I do and believe that when clinicians identify material that can improve their clinical practice, they are motivated to professionally develop. I am passionate about helping clinicians learn, remember and teach clinically relevant concepts in an easy to understand way.

When I am not working or blogging; I enjoy spending time with my husband, our fur babies, travelling to exciting new places and capturing beautiful photos all over the world!

Looking for something in particular?

Looking for something in particular?

Blogging for your Noggin Stats